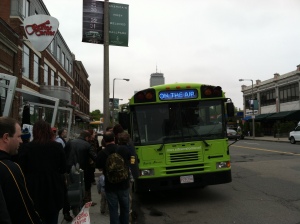 Today we had the unique opportunity of playing a stripped down set on a bus parked in front of 1265 Boylston St., Boston, the former location of WBCN (now Jerry Remy’s restaurant).

Listening to 104.1 WBCN was a daily occurrence for me throughout the 1990’s and 2000’s. They were the first station to ever play some of my music and introduced me to a lot of new artists. It was a shame they were taken off the air in 2009. But today was something very special to be a part of. In addition to a host of former BCN DJ’s in attendance, including a phone-in from Charles Laquidara, WBCN’s first Program Director and Rock Radio Maverick Sam Kopper was there.

As I write this I’m only now fully realizing the talent and historical significance of the people on that bus today. Kind of ironic that the radio station that brought the freeform rock and roll format to Boston had to be parked on the street next to it’s original building. I wanted to drive the bus through the wall of Remy’s!

However, WBCN does live on and is starting to crossover from robot radio to live human beings like at today’s broadcast. Help us support them by listening HERE. 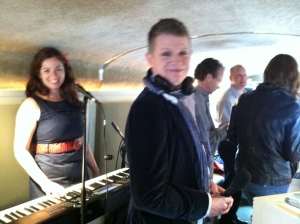 Back to the music. Our set was 4 songs and featured Magen on keys and myself playing acoustic. I thought we sounded really good and it was cool to hear the songs played like that. I hope we can play them like that again.