Good times at the BMA’s last night! Pictured above at the beginning of the night with Richard Bouchard from Boston Band Crush and Dan Nicklin of Old Jack. The three of us announced some of the bands who performed at the event held at the Liberty Hotel Boston. 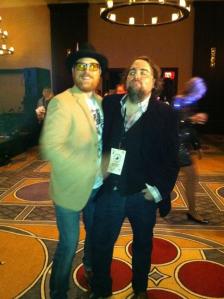 Things definitely got a bit looser (and more blurry) during the evening as shown here with Dan and I striking a pose.

Dan and I eventually ended up in a bathtub with Michael Marotta, Music Editor of The Phoenix and host of WFNX’s Boston Accents, for an interview shortly before he was thrown out of his hotel room!

To hear the rest of the bathtub interviews and the angry security guard say, “you got a damn recording studio in the bathtub,” go Here!