After much deliberation, procrastinating and tweaking I’m finally ready to release my first ever solo album. It’s in your hands and ears now people so I hope you enjoy listening to it as much as I did creating it. For now it’s available digitally at Bandcamp but I hope to get some hard copies available for the CD Release Show at the Rosebud Thursday August 25th.

A little about the recording……

I started this solo project about a year (or two) ago after coming up with some songs I thought represented my love for mellow, country and folk music. I decided to keep the tracks to a minimum and also wanted to play every instrument myself. So I packed up my studio and headed south to Chatham, Cape Cod where my family has a summer house. I set up the mics in the living room in front of the fireplace and the control room on the porch. 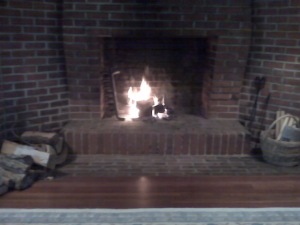 (I thought I had pictures from the session but I guess not so this one of the fireplace will do!)

I spent an entire night recording the vocal and guitar as two tracks for five or six songs as my basic tracks. I was also engineering so before and after takes I had to go back and forth from room to room to hit stop or record. The house was relatively quiet inside but I had to close all of the windows because there was a little outside noise. If you listen closely you can hear the occasional passers by talking, a car or two and I swear I can hear seagulls on one track.

The next day I laid down some overdubs with my resonator and electric guitar as well as some backing vocals. Unfortunately that was it for the recording for some time since I became increasingly busy with other projects and decided to put it on the shelf for a little time. I did make some rough mixes to listen to and made a list on what needed fixing or additional instruments so the intent to finish was there.

It wasn’t until about 6-8 months ago that I got back to work on the songs. I had some computer issues and it took a while to retrieve the files and convert them but when I had them ready I headed to longtime friend and The Blizzard of 78 band mate Chris Cuginis Appleman Studio to finish tracking and mix. Again, other things got in the way and the process was slow but eventually I finished the tracking and made some mixes to listen to.

What I heard really pleased me and I became at peace with the songs and mixes. As some of you know there is only so much one can do when recording music and most of the time it’s best to stop when the songs sound musical which at this point they did. So, that was that. I sent them off to Dave Collins to be mastered and they sounded even more like what I was going for.

So there you have it my solo EP “Inference” enjoy!