It’s been a busy month as most have been lately so here’s a recap of what’s been going over the last month and a half.

August ended with a bang as I took part in the second annual One Night Band. This is the thing where 40 local musicians are randomly put into five, eight piece bands, have to write and perform 3 original songs, 1 cover and perform it the same night. I really enjoyed myself and it was easily one of my best musical memories.

The day started off very early with an assembly of all the musicians in a club where we we’re handed envelopes but instructed not to open them yet. As the anticipation grew the moment finally arrived and all of us ripped into our envelopes to find….a sticker of some creature. OK. So now we had to find other people with the same sticker. I looked around and checked with friends but I couldn’t find my group until I noticed four people standing around waiting patiently for a fifth. In that group was Sophie Innerfield, vocalist and pianist from her project called Highly Personal Trash, Mike Epstein guitarist and vocalist of DNFOMD and MJEML, Drummer Benny Grotto from Motherboar and Bassist Jim Collins from Gene Dante and the Future Starlets. We quickly picked a theme which led to our name, The Positronic Rays and what happened next was a whirlwind of a day where we spent most of it in Benny’s rehearsal space writing what turned out to be a mini space rock opera. All I can say is these people we’re great to work with and I would do it all again in a second if I had the chance. Check out the video of Space Man Max Part 1 to see the end result of a long day of enjoyable hard work. Oh yeah, and I also got to perform The Final Countdown by Europe as our cover!

On September 10th and 11th I performed back to back sold out nights with Brendan Boogie and the Best Intentions at the Traveling Wilburys Cover-Up as Roy Orbison and what a doozie. Roy-o also know as The Voice and Big O was such a pleasure to learn and musically kicked my ass! The songs are tremendous and go from 1-4-5 blues like Oobie Doobie and Candyman to carefully crafted mini pop orchestrations like In Dreams or It’s Over. Again, another musical memory that will last forever and I can’t wait to get the chance to perform them again! Check out some pics taken by Johnny Arguedas 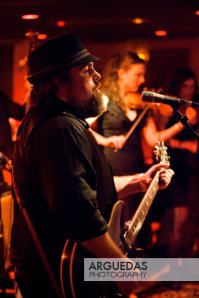 The third annual Peace in the Park Kids As Peacemakers was held in Newburyport on Sunday September 19th and some of my students from Cats n Jammers performed. They’re we’re quite a few bands from the young rockers of tomorrow (or today) and they all delivered. I performed with two of my students, one was a Rob Thomas song called “Little Wonders” and the others we’re The Who’s “I’m One” and an original instrumental. 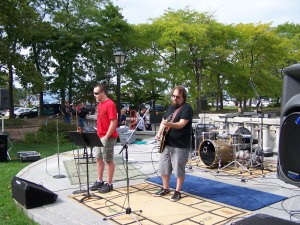 The Blizzard of 78 has been busy recording songs for a new ep which will be released in December. We took a short break on September 24th to play a show in Providence called 4 Bands 3 Designers. It’s a very cool event we’ve played in the past where local designers have a fashion show with bands in between. Check out the video from a previous 4 Bands/3 Designers.

To finish up the month I did an in-studio appearance on Boston Emissions with Anngelle Wood on 100.7 WZLX. We talked about the three releases I have coming out, my crazy busy year and we also debuted new tracks from the Blizzard and Parlour Bells. I also performed a live acoustic version of Morphine’s “The Night” which I really enjoyed. Anngelle was celebrating Mark Sandman’s birthday and I contributed by doing the cover. You can here the podcast here.

OK. That’s all for now for the longest post ever!